A nave for men 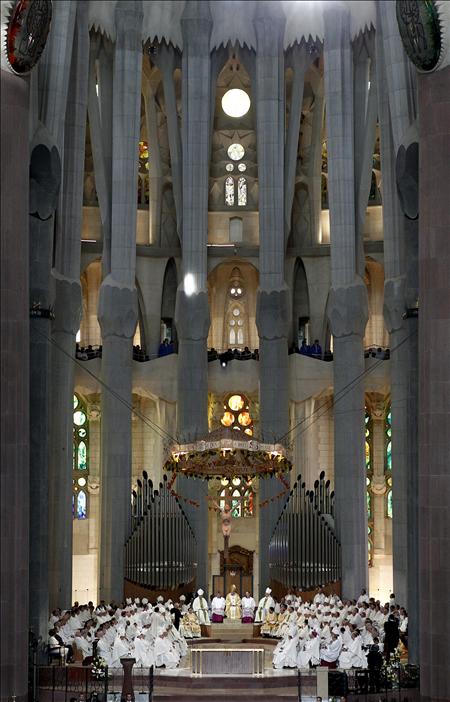 The first stone of the nave of La Sagrada Família was solemnly blessed on 11th of  December, 1921, by cardinal Francesc Vidal i Barraquer (Cambrils, Catalonia, 1868 – Freiburg, Switzerland, 1943). The great architect Antoni Gaudí was there, respectfully holding in his hand his shabby hat, typical of a bohemian artist. He was sixty-nine years old and he had spent thirty-eight years working on La Sagrada Família.

In the beginning, when he was young, he calculated that the duration of the construction would take ten years. Later, he saw that people did not give enough charity to build La Sagrada Família and the construction would last longer than his life. He worked on La Sagrada Família while carrying out other projects; but during the last ten years of his life he worked there exclusively. He knew that he could not finish his work and leave it in the hands of Providence. When he died, he had only made the apse and almost all of one of the two sided facades.

Because of the lack of funding, in 1910 the global project of La Sagrada Família was close to failure. The Board of Work decided to stop the construction, and the Bishop of Barcelona wanted to convert the existing part into a parish church. But Antoni Gaudí, against the decision of the Board of Work, against opinions of intellectuals of  Noucentisme Catalan movement and anticlericals, decided to give up his earnings and to find funding to continue the construction. Each evening, he asked friends and unknown people for money to pay the few workers that remained. Many people believed he had gone crazy, but he had the support of ordinary people and the brightest personalities of the Roman Catholic Church in Catalonia. Including the poet Fr. Jacint Verdaguer; Dr. Torras i Bages, Barcelona priest and later bishop of Vic; and finally, Dr. Vidal i Barraquer, who in 1919 was appointed archbishop of Catalonia and in 1921 made cardinal.

Cardinal Vidal i Barraquer was the great protector of Gaudí in the last stage of his life. Laying the first stone of the nave, both made an act of faith in the Christian future of Catalonia and all of Europe. When some people objected that he was building the last of the cathedrals, the architect thus answered: But it may be the first of the second stage.

The nave of La Sagrada Família has a place in the history of religious and universal architecture. Along with the pillared hall of Karnak, the Parthenon, the Constantinian basilicas, the interior of Hagia Sophia and the cathedral of Chartres. If only for its hyperbolic paraboloids, hyperboloids, double helical twists and other forms used there for the first time in history which were extracted from Nature by Gaudí.

However, what architectural space do these new art forms define for its location, size and relative distances? Gaudí categorically stated: I have come to take architecture on  the point where Byzantine style lends it. Byzantine is the style of Christianised Greeks. He identified himself as a classical Greek architect.

In effect, the interior space that Benedict XVI dedicated to the worship of God on 7th of November, 2010 has the most exquisite Greek proportions. In Catalonia, this was known, although with less intensity, in the Basilica of Santa Maria del Mar of Barcelona. It isn’t the abode of a divinity that crushes with its omnipotence, or that away from the men with their ascent, or that is hidden in fragmented spaces, full of drama and mystery. It is neither a box for storing precious decorations, but the content itself is so precious. It’s a unique space with a single construction, full of harmony, serenity and grandeur. It is not the abode of an inaccessible God, but the airy setting for the conversation of a God humanised with his people. Like the Parthenon, it is made to the measure of man and humanised God. It has the clarity, the solemnity and the proportionality of the human body, the qualities of Byzantine art: the Greek style converted to Christian.

Vitruvius wrote, and was illustrated by Da Vinci, that "if you take the measurement from head to foot and compare it with the distance between the outstretched hands, it was the same, so the area will be perfectly square". He added that especially "the buildings of gods must be distributed in perfect order. (...) The ancients considered that 10 is the perfect number, because it corresponds to the number of fingers. And since both hands naturally consist of ten fingers, Plato stated that 10 was the perfect number."

If he was lifted vertically, he would find his area projects perfectly among the height of the knots of the tree-columns of the nave and the width of the nave, forming a square 20 x 20 strides, such as in Santa Maria del Mar.

He would again find a second time the projection of his area between the height of the vaults of the two interior aisles and the width of the entire colonnade (the sum of the nave and such vessels), that form a square of 40 x 40 strides, which can be seen again in Santa Maria del Mar.

And in a triple expansion that doesn’t exist in Santa Maria del Mar, his projection would be found a third time between the height of the vault of the nave and the width of wall to wall, forming a square of 60 x 60 strides.

The ratio between these three squares is 3:2:1.

From the very entrance of the temple, Da Vinci’s model man would have seen something that doesn’t exist in Santa Maria del Mar: the domes, with the representation of the Eternal Father, covering the chandelier of the Holy Spirit falling over the 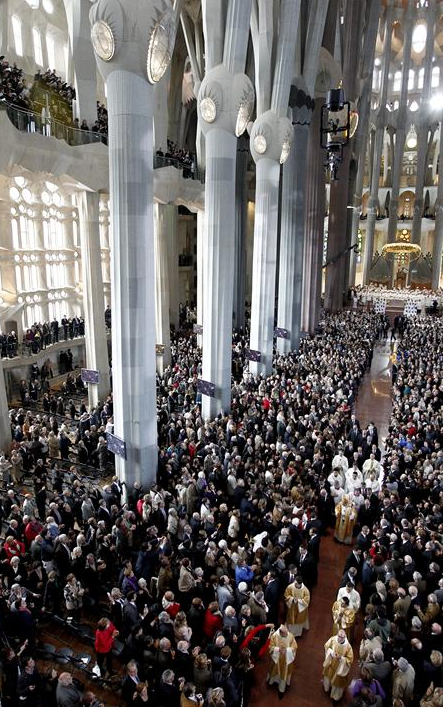 altar of Jesus Christ. Every time he walked towards the altar 10 strides -one for each finger of the hand, the number that Plato considered human and divine-, he would cross a row of columns and would tour a section of the nave. The first six sections of the nave are the square base of a cube which length, width and height is 60 strides: that is, follows the human proportions. Here men pray.

If he continued moving towards the altar, he would enter into the second volume. Like the first cube, it also has a length and width of 60 strides, but its vertical dimension is higher. It rises from human proportion to the divine proportion: to the highest domes of Mary and Jesus Christ.

The altar is in the exact centre of the second square of 60 strides per side. The altar is placed in the axe from the main entrance to the apse. It is situated closer to the apse by the distance of 3 quarters from the main entrance. The altar is the place of transubstantiation, where the bread and wine become the body and the blood of Christ, the God-Man, the Logos of the Greeks. All the functionality of the building is arranged exclusively and fully for this event, the centre and summit of the Liturgy. Because for Gaudí, Liturgy was the supreme law of the architecture of the temple, beginning with its geometry. Thus, the altar is the first point of the geometry of La Sagrada Família, from which the great architect drew the whole church, as the Logos is the beginning of Creation and remains immanent in it.

Anton Gaudí was a Mediterranean genius, of the classical tradition. He said that his temple, without denying its direct affiliation with the great works of medieval Christian art, should have, Hellenic grace, balance of form and content, size and location, divinely human and humanly glorious.