The Twelwe Martis of the Basilica of the Holy Family 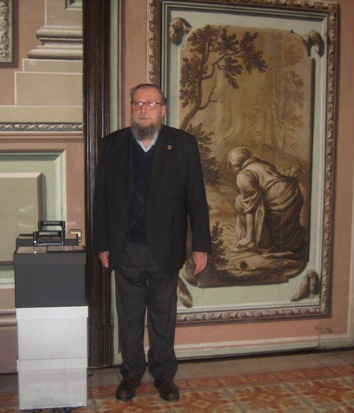 The Basilica of the Sagrada Família will have twelve martyrs. On 17 January 2012, Cardinal-Archbishop of Barcelona, Lluís Martinez Sistach, has closed the diocesan phase of the process of beatification of the Twelwe Martyrs of the Basilica of the Holy Family. These twelve presumed martyrs are six priests killed at the beginning of the Spanish Civil War and six lay people who died because had helped them or refugee: Dr. Francesc Parés, Chairman of the Board of Works, Fr. Gil Parés, chaplain of the Crypt, Fr. Jaume Llonch, organist and vicar of the Crypt; Dr. Ramon Balcells, founder of the Savings Bank of the Holy Family; Fr. Antoni Forn, parish of Sant Joan de Gràcia, the parish of Gaudí; oratory Fr. Augustí Mas, spiritual director of Antoni Gaudi; Consol Puig, teacher of the School of the Holy Family, and Clodomir Coll, who died refuge Fr. Gil Parés; brothers Francesc and Mercè Diéguez, who died with Fr. Jaume Llonch; Francesc Xavier Cunill, collaborator Dr. Balcells; and Ramon Parés, brother of Fr. Gil. Cardinal Martínez Sistach appointed as a carrier to the Congregation for the Causes of Saints in Rome, the minutes of the process, Mr. Antoni Oliva. He is the founder and president of the civil association that promotes this process of beatification. The number twelve cannot be more Gaudí, as is the fact that they are six lay, including two women. If, as Gaudi said, "At Sagrada Família, all is providential", it seems that process of beatification. In a few years, the Twelve Martyrs of the Basilica of the Holy Family will be beatified: then the building chosen by the Catholic Church as icon of the New Evangelization will have all the elements necessary for evangelization: stone materials -Gaudí's art- and spiritual stones, starting with the most genuinely evangelical and which is the foundation of all others: the testimony of twelve Christians who have given their lives to Jesus Christ.