On Good Friday 1992, the popular preacher Fr. Ignasi Segarra (Albesa 1929 - Barcelona 2003) made the Sermon on the Seven Words in Riudoms. He illustrated it with sentences of Gaudí who headed each chapter of a recently published biography. We came from visit the Mas de la Calderera, where the architect had learned the first lessons of his great teacher, Nature. The priest down from the pulpit even radiant for the touch of the Holy Spirit and said: "Its necessary to beatify Gaudí." Quickly a group of lay came ready. We proposed to the Archbishop of Barcelona to promote the beatification. Did not care, because leading clerics and lay intellectuals were against, and even some would say that we were clowns and we spent a joke. Downstairs the Archbishop, we made the Associació pro Beatificació d'Antoni Gaudí, civil entity registered with the Catalan governement. It was providential, because it is evident that Gaudí was not a priest, a monk or a sexton. Besides, nobody can accuse the Catalan Chruch to mount the beatification for economic reasons or tourism; nor to the Association, independent and living of donations. Gaudí, then, will be beatified by people, the same people who, while intellectuals of the Catalan artistic movement called Noucentisme and the anticlericals reduced to the role of the madman, a nut morbid, gave the money to raise his "Cathedral of the Poors", and perhaps Don Anton likes it that way. To launch the beatification, we follow McLuhan: "The Medium is the Message" and "we live in a global village." We edit a prayer card in Catalan, English, Spanish and Japanese. It's called The Architect of God, which is like Gaudí had been called after his death in 1926. Because our idea was not original (as in the case of Gaudí is a sin). The architect had died with a reputation for holiness and was to be beatified. But come the fall of the monarchy, religious persecution, war, the general Franco, the Vatican II and the after council. There werent "the times" of the beatification. This is what the Holy Spirit had revealed to Dr. Ignasi Segarra at Mas de la Calderera to announce that, beginning with his beloved Riudoms: It is now "time" of the beatification of Gaudi! Is the period of the pontificates of John Paul II and Benedict XVI. Indeed, Gaudi is an exemplary embodiment of the idea of Pope Polish patriot and artist of that faith is only fully experienced when transformed into culture and culture is the nation. And it is the opposite of relativism, reported by the theologian Pope as the enemy of Christianity today: Gaudí repeated that "Beauty is the splendor of Truth", believing in the Truth, absolute and independent of those who seek it, and that their work artist was precisely to shape the finite matter until the infinite light of Truth could be seen in it by all other men. Gaudí is the archetype of the "alliance between the Gospel and Art" advocated by John Paul II in his Letter to Artists (1999), which develops the Message to the Artists of the end of Vatican II (1965). Benedict XVI rich it 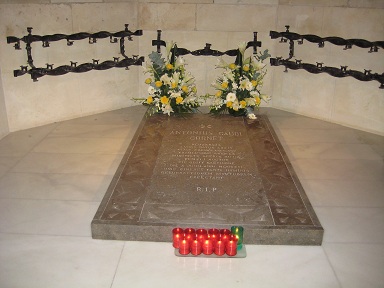