The Architect of La Sagrada Família 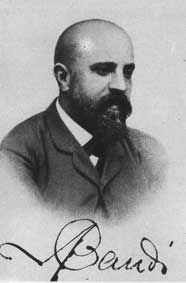 Anton Gaudí i Cornet was born in Reus (Catalonia) on the 25th of June, 1852. He was a sick child, which prevented him from going to school and forced him to spend long seasons in Riudoms’ family farmhouse. Here he captured the light of the Mediterranean and the images of  nature, which he would always consider his great teacher. Besides helping his father in his boiler making workshop, he learned the virtues of work and the transformation of surfaces in volume, which greatly developed his spatial imagination.

He studied at the school of the Piarist Fathers of Reus. During the "Glorious Revolution” of 1868, he moved to Barcelona to study Architecture, the passion of his life. He was a bad student, but he spent a lot of time looking at photographs of oriental buildings and he frequented classes of Philosophy, Aesthetics and History. He also attended concerts, classic and modern theatre plays, poetical readings and intellectual gatherings. Gaudí also visited and studied all of the monuments and landscapes of Catalonia. He became one of the biggest figures of the Catalan renaissance, called La Renaixença.

To make a living he had to work, which he did by working as a draftsman for engineers and architects. Such as Josep Fontserè, designer of La Ciutadella park; Francisco del Villar, restorer of Montserrat; and Joan Martorell, architect of the Jesuits, the Visitandines and other grand churches.

In 1878, Gaudí finished his studies. The director of the Architecture School commented to the other members of the tribunal: «Today we have given an architecture degree to a madman or to a genius».

Gaudí was conscious from a very young age that he was an artistic genius, and that his ideas were not a repetition or a mere continuity of other architects work up to that time. The only thing that he feared was that no other architect had put these ideas into practice before, and he was to be the first one. He had studied and discovered the geometric and constructive laws with which the nature –the masterpiece of the Creator­- is made and he was trying to create his art with the same principles: His aim was not to copy the Creation, but to continue its course by cooperating with the Creator. He said: Originality consists of returning to the origin.

In 1878 he met Eusebi Güell i Bacigalupi. This important businessman with great artistic sensibility understood Gaudí and became one of his best friends and his main client throughout his life: the Güell Pavilions (1884-87), the Palau Güell (1886-88), the Celler Güell (1895-97), the refuge of El Catllaràs (1905) and two of the most creative works of the artist in the later stages of his career: the Park Güell (1900-1914) and the church of the factory town Colònia Güell (1908-1917).

After the death of his brother Francisco, his sister Rosa and his mother, Gaudí took care of his orphan niece Roseta and his elderly father Francisco. He had romantic relations with Miss Pepeta Moreu, who rejected his proposal of marriage. Other women would appear later in his life, but Gaudí died without marrying.

As a young man he lived very close to the labourers and thoroughly studied their problems, specifically the poor conditions of their lives. At the time of the International Workingmen’s Association —with the socialistic trend of Marx and the anarchist trend of Bakunin—, Gaudí was an architect of the Cooperative Mataronense (1874-1885), which was supporting the merge of the capital and the work into one element: the cooperative worker. The Cooperative Mataronense was Catalonia’s first factory and one of the first ones in the world that belonged to its workers.

At the age of 31, in 1883, Gaudí received the order to continue the works of La Sagrada Família, which had already begun. He moved his office there and shared the appreciation of the religious and artistic purpose of La Sagrada Família. During forty three years, until his death, Gaudí dedicated his time to developing the project of this grand church, with his ideas on structure, form and symbolism working in a perfect tandom of rational forms extracted from nature.

Gaudí was friends with some clergymen who had innovative ideas about social reforms and about the liturgical reform: the poet Father Jacinto Verdaguer; Bishop Joan Baptista Grau from Astorga, who had entrusted him with designing and building the Episcopal Palace (1887-1893); Father Enric d’Ossó, founder of the congregation of St. Teresa of Jesus, who had also entrusted him to build the central school (1888-89); bishop Pere Campins from Majorca, who had as well entrusted him to reform the cathedral (1903-1914); etc. Over all, the friendship was important with Bishop Josep Torras i Bages, from Vic, ideologist of the Christian wing of the Catalan Renaixença.

In 1894, his religious life was progressively intensified. During Lent that year, at the age of 42, his fasting was on the verge of killing him. In 1906, he moved to live in the Park Güell, at the top of Gràcia neighbourhood.  Every morning he walked down from his house to Saint John’s parish inside Gràcia to take part in the Eucharist. He continued then up to La Sagrada Família. Every evening, after work, Gaudí went to the Oratory of St. Philip Neri to realise his personal devotions and to meet with his spiritual director, Father Lluís Maria de Valls. With the conviction that without sacrifice it’s impossible to improve a project, he submitted himself to a life of penance and voluntary poverty.

Gaudí had expressed his desire to die in the Christian charity’s hospital, as a poor person of his time. God granted him this desire. On Monday the 7th of June, 1926, he was knocked down by a tram. The people who found him didn’t realize that this injured man was Gaudí. Because of his normal appearance they took him as if he were a poor man, to the Holy Cross hospital. Three days later, on the 10th of June surrounded by his friends, he said his last words: Amen. My God! My God!.

Gigantic crowds took to the street on the day of his funeral and accompanied his body from the hospital up to the crypt of La Sagrada Família, where he is buried to this day.