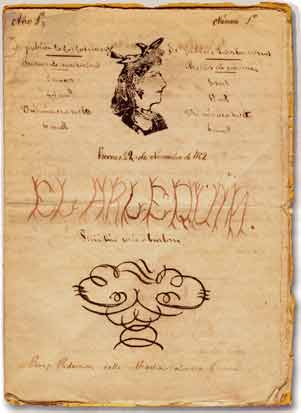 The Gaudí i Cornet, making a great economical effort, registered theirs sons, Francesc and Anton, at the school of the Piarists Fathers of Reus. There, Anton Gaudí finished the five first courses of High School, among September of 1863 and June of 1868, since he was 11 years old until he fulfilled the 15. In the school he joined friendship with Eduard Toda and Josep Ribera; and he collaborated with his drawings in the handwritten magazine that his two friends wrote, called "The Harlequin". In the theatrical representations, he did not intervene as an actor, but only painting the sceneries. He seemed interested only in the plastic art. Every Saturday they prayed and sang the brief hour to Virgin, moment that touched him and awakened in him the interest in the Catholic liturgy and the discovery of its beauty.