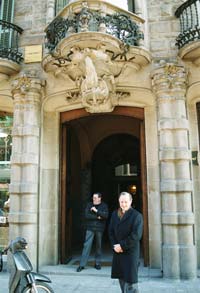 The house Calvet is placed in Casp street, n. º 48 (between Roger de Llúria and Bruc). It was entrusted to Gaudí by Juliana Pintó, widow of Pere Màrtir Calvet, and her sons Eduard and Pere. Eduard Calvet i Pintó (1875-1917) was a important cotton manufacturer, presided the Catalan employers organization Foment del Treball Nacional (1913) and was deputy by Solidaritat Catalana (1907) and senator by a party that was defending the Catalan nation and was supporting the republic (1914), politicians ideal pleasing to Gaudí. Gaudí designed the house in Baroque Catalan, style of the XVIIIth century, which the architect was admiring and which influenced very much his work. And he was demonstrating that his her genius could express across any architectural language: Gothic, Mudejar, Baroque, Modernist, etc. Gaudí was 45 years old when he signed the project (March 29, 1898), which was delineated in the workshops of the Sagrada Família by Berenguer helped with Joan Rubió and with Juli Batllevel. The patternmaker Joan Bertran did the model of plaster, much more precise than the planes. The architect adopted the classic distribution of these houses between medians of the "manufacturers neighborhood": basement for store of fabrics; commercial floor; principal flat, with terrace in the posterior front, for housing of the owners; three flats more parties in two or four housings for rent; and roof in the Catalan manner. Without Gaudí was asking for it, the Town hall awarded the prize to the best building constructed in Barcelona in 1899 to the house Calvet, "which general lines, as external as interior, and which details, there accuse an artistic definite well personality and a good taste and an originality that excel in the front elevation that in the useful disposition of the above-mentioned house." The juror was considering to be excellent the use of the stone, the carved wood, the wrought and molten iron, the glazed ceramics, the stucco and the bronze. They found very ingenious the stairs, which enlarges the real proportions with the court of lights; and the unsurpassable hygienic conditions of the building, as for ventilation and installation of lavatories and exits of residual waters by means of siphons. The mythical magazine of the Catalan Modernism "Pèl i Ploma " dealt for the first time of Gaudí: «Felicitem al propietari i destijem que'n fassi fer d'altres a n'en Gaudí, i en quant a n'aquest, violentant la seva sistemàtica modestia, tambél felicitem com ja fa temps que veniem fent-ho desde la primera visita que ferem al temple de la Sagrada Família». Arquitectura y Construcción" defined the house Calvet as "a comfortable house, by the way for the middle class". "La Ilustració Llevantina" qualified it of: «Obra meritíssima deguda al arquitecte barceloní don Antoni Gaudí, autor y director del monumental temple de la Sagrada Familia, veritable poema de pedra que admirarà a les futures generacions». "Hispania" commented: «As all the really creative men, Gaudí is very varied in his work. (...) "Hispania" could not stop pass this occasion without his enthusiast's admiration those who have been already produced to the genial artist Gaudí.» Francisco Rogent, in "Modern Architecture of Barcelona", was saying: «All the details have been chosen and regulated by exquisite criterion, insuperable and harmonic intonations being obtained». And Buenaventura Bassegoda, in the "Diario de Barcelona", thought that «it is the prototype of the distinction and the elegance (...) since according to Brumel the supreme good tone consists of not making be obvious.» The house Calvet (1899) is the Gaudí's first house in the Eixample. Of it, there would go out the house Batlló (1905) and the Quarry (1912). I recommend to visit them in this order. The most prominent exterior elements are the front, the platform, the auction of the front, and the latch. Gaudí designed also the foyer, the stairs and the whole interior, including the furniture. On June 12, 1926, Gaudí's mortuary car stopped brief here ahead, in his way towards the Sagrada Família. The house was illuminating a great black crape as a sign of grief.